Adonis was born Giuseppe Antonio Doto in Montemarano, an Italian village within the province of Avellino, not far from the City of Naples. His family brought him to the United States when he was a child. His father Michele/Michael Doto (whose surname was also written "Dato" and "Adone") reached the U.S. first, in 1904, settling with an uncle on President Street in Brooklyn. Adonis and three brothers crossed the Atlantic with their mother in the summer of 1909. They joined Michele, then living on Brooklyn's Carroll Street. Some reports indicate the family lived for a time in Great Barrington, Massachusetts, but these could not be confirmed.

Over the years, Giuseppe Doto used a number of aliases before settling on the one that became famous. He referred to himself as "James Arrosa" or "Joseph Arroso" in the mid-1920s and as "Joseph DeMio" in the early 1930s. He likely picked up his "Adonis" alias from the "Adone" surname previously used by his family around the time of the 1915 New York State Census. The name "Adonis" referred to a human character in Greek mythology known for his physical attractiveness and his great hunting ability. The origins of the Adonis myth appear to blur with those of the hunter Orion, and these hunter tales may have been regional adaptations of a single original story. Both characters had tragic encounters with Greek goddesses.

A longtime Brooklynite, Joe Adonis was arrested for assault and battery in 1922 (not prosecuted), for grand larceny and robbery in 1926 (discharged), disorderly conduct in 1927 (fined), liquor smuggling in 1931 (not indicted), assault and robbery in 1937 (discharged) and kidnapping and extortion in 1940 (dismissed). He was affiliated early in his criminal career with regional Mafia bigshots Frank Yale and Anthony "Little Augie" Pisano (Anthony Carfano). These associations may have brought Adonis into the orbit of late 1920s Sicilian Mafia boss of bosses Giuseppe Masseria. Adonis, Pisano, Vito Genovese and Mike Miranda became the most prominent Neapolitans working within the Giuseppe Masseria organization. 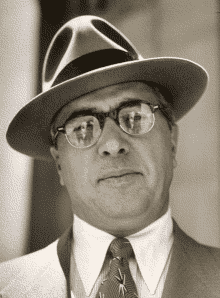 Unsupported legends: According to some writers, who provide no supporting documentation, Adonis attended a May 13-15, 1929, national "convention" of bootleggers in Atlantic City. There is no hard evidence that Adonis was in Atlantic City at this time or that the "convention" involved anyone outside of visiting Chicago gang bosses. Some sources have named Adonis one of the gunmen who assassinated boss of bosses Giuseppe Masseria at Gerardo Scarpato's Nuova Villa Tammaro restaurant in Coney Island on April 15, 1931.

Mafia informant Joseph Valachi stated that Adonis - who directed criminal activity at the Brooklyn docks alongside Albert Anastasia and ran the Brooklyn eatery known as Joe's Italian Kitchen on Carroll Street and Fourth Avenue - was among those targeted for elimination by Maranzano after the conclusion of the Castellammarese War in 1931. Following Maranzano's assassination later that year, the Mafia reorganized. Adonis reportedly became a major player in the reorganized underworld, though his precise role, if any, in the Mafia hierarchy remains hazy.

Adonis's specific crime family affiliation has also been hazy. Some sources named him a top lieutenant in the Brooklyn Family of Vincent and Philip Mangano, while others placed him within Luciano's own Manhattan-based organization. Nicholas Gage suggested that Adonis was actually the first post-war leader of what became the Mangano Family, but this conflicted with accounts of better informed sources. (Gage did not offer a sufficient explanation for how or why Adonis became less than a Family boss later on.) Joe Bonanno, who probably knew Adonis' title, doesn't speak of it in his autobiography, and Valachi seems not to know anything about the Brooklyn mobster's status.

Evidence suggests that Adonis's authority - and close personal associations - overlapped the Mangano mob territory in Brooklyn, but that he owed his primary allegiance to his long-time friends Luciano and Frank Costello, based in Manhattan.

Adonis's mother, Maria DeVito Doto, passed away in the summer of 1934. His father died in April 1939.

Eventually, Adonis seemed to be everywhere and into everything - alcohol, gambling, drugs, union rackets, political shenanigans... He had established relationships with several Mafia Families and with some non-Italian gangs as well. Adonis was known to be a trusted ally and confidant of Frank Costello, who presided over Luciano's Manhattan Family after Luciano went to prison in the 1930s. Adonis joined Costello and Jewish mobsters Meyer Lansky and Benjamin Siegel in ownership of the Colonial Inn casino in Miami Beach and participated in gambling ventures in the Saratoga, New York, area. Adonis also shared a gambling empire in New Jersey with Mafioso Willie Moretti, Costello's close ally. His involvement in the Automotive Conveying Company of Cliffside Park, New Jersey, caught the attention of the U.S. Senate's Kefauver Committee and New Jersey prosecutors.

Adonis, who had long claimed to be an American native and who had settled in Fort Lee, NJ, in the mid-1940s (his Dearborn Road home was about a quarter mile from the Bluff Road home of Albert Anastasia), was shown to be an immigrant in the 1950s. Birth records indicating a 1901 birth in Passaic, New Jersey, were found to be fraudulent. Italian birth certificates, immigration records and early statements made by Adonis and his family members to authorities conflicted with statements Adonis made under oath before a New Jersey grand jury. Adonis was ordered to be deported in 1953. He fought that order in the courts. A voluntary deportation to Italy occurred in 1956 in the wake of a perjury charge stemming from the Kefauver Committee hearings.

One of the legendary fallings out between the American Mafiosi and the Kennedy Administration was allegedly over arrangements for the Mafia to support Kennedy's candidacy for President in return for Kennedy allowing Adonis back into the country. According to this tale, President John Kennedy was reportedly willing to welcome Adonis home, but Attorney General Robert Kennedy blocked the move.

The Italian government decided to inflict an exile within an exile upon Adonis on June 20, 1971. A Milan court demanded that he be restricted to the town of Ancona on Italy's Adriatic coast. Adonis died there of natural causes on Nov. 26, 1971. His remains were returned to the United States and buried Dec. 6 in Madonna Roman Catholic Cemetery in Fort Lee, NJ.

The Adonis funeral was relatively low-key. A cortege of fifteen automobiles, led by three cars of flowers, drove from Macagna's Funeral Home in Cliffside Park, New Jersey, to the funeral Mass at Epiphany Church. A private service was then held for Adonis's family - his wife, son and three daughters - and close friends at the chapel in Madonna Cemetery. The family and most attendees left before Adonis's casket was lowered into his grave. A number of reporters and photographers kept close watch on the event. There were no reports of known underworld figures in attendance.