Aiello was the boss of the Sicilian Mafia in Prohibition-Era Chicago. While Alphonse Capone is widely regarded as Chicago's "Mafia" leader, Capone was not Sicilian and his involvement in Windy City organized crime was resisted by conservative Sicilian Mafiosi. As the recognized leader of the post-Genna Sicilian underworld in Chicago, Aiello controlled much of the criminal element in the city's Little Sicily, including its home liquor-making establishments, and was a thorn in Capone's side.

Aiello moved to Chicago after being involved for a time in the underworld of Utica, NY. He was a suspect in the 1917 shooting of East Utica resident Antonio Gagliano. In Chicago, he established a grocery business in partnership with Antonio Lombardo. Both men eventually served as leaders in the Chicago-based Unione Siciliana organization. Aiello was suspected of involvement in the January 1929 murder of Capone-backed Unione Siciliana leader Pasqualino Lolordo.

In the late 1920s, Aiello allied with Bugs Moran's North Side mob in Chicago in an attempt to destroy Capone. Giuseppe Masseria of New York, the U.S. Mafia "boss of bosses" of the period, attempted to mediate the growing conflict between Aiello and Capone around 1929 but only succeeded in offending Aiello (as well as his allies in Detroit, Buffalo and Brooklyn).

During the early Castellammarese War, Aiello supported Castellammarese forces against Masseria and spent some time hiding from his rivals in Buffalo. Aiello would have been on the winning side in the Castellamarese conflict, but he was killed by Capone's men on Oct. 23, 1930, near the corner of Kolmar and West End Avenues. He was hit by dozens of bullets fired from several locations as he tried to reach a waiting taxicab.

Joe Aiello had several brothers who also participated in bootlegging and other Mafia endeavors. The Aiellos were the heirs to the Genna organization of the early 1920s. 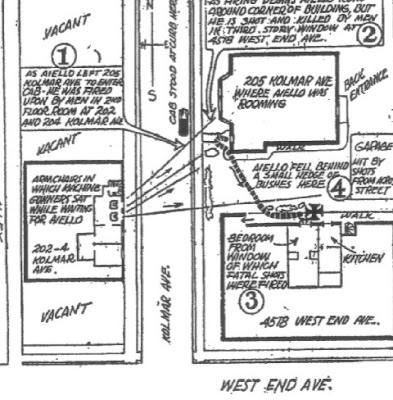