Lombardo, a trusted Capone adviser and perhaps his organization's consigliere, was one of the tools used by Capone in his effort to penetrate Chicago's Unione Siciliana.

In the chaos following Unione leader Mike Merlo's death in November 1924, Samuel Amatuna briefly held the presidency of the Sicilian underworld network in the Chicago area. Amatuna got in the way of some bullets five days after the first anniversary of Merlo's death, and the Unione leadership was once again vacant.

According to legend, Capone, who had taken over Johnny Torrio's operations in January of that year, used his influence to shove Lombardo into the president's chair. Reportedly many objected to the move but were too fearful of Capone's wrath to oppose it. The legend is probably inaccurate. Capone's authority within Chicago's Sicilian-Italian underworld was limited in 1925. However, it could be the case that Lombardo - a respected figure in the immigrant Sicilian community - took Capone under his wing.

Antonio Lombardo was born to Salvatore and Rosaria Lombardo on Nov. 23, 1891. Little is known for certain of his early life. It appears he entered the United States early in 1909. By the Prohibition Era, he was living in Cicero, Illinois, and running a successful wholesale grocery in Chicago.

Legend says that, by 1926, Lombardo was preparing the way for a direct takeover of the Chicago-area Unione Siciliana fraternal organization by Capone. Lombardo supposedly opened the membership of the group to non-Sicilian Italians, allowing the Neapolitan Capone to become a member. As a sign of the policy change, the organization changed its name to the Italo-American National Union. While the name change portion of this legend is accurate, the Unione fraternal organization had actually been open to non-Sicilian Italians for some time but remained closed to any who had criminal records. So, either the legend of Capone's takeover is incorrect or the name Unione Siciliana was applied at the time to more than the fraternal organization. If Unione Siciliana was a term used to refer to an underworld network in the Chicago area, it would explain Capone's long struggle to earn its recognition.

By 1927, Capone's meddling in the Unione and his aggressiveness in the Chicago rackets had forced the Aiello Brothers into an alliance with the North Side Gang against Capone. In January 1928, there were demands that Lombardo surrender the local Unione presidency to Joe Aiello. That did not happen.

The Sicilian underworld in Chicago took aim at Lombardo and blew him away in early September. He was shot in the head in front of 61 East Madison Street on Sept. 7, 1928. Lombardo's funeral was elaborate, in the gangland tradition. Mourners lined the streets, and floral decorations filled his home and spilled out onto the lawn. An enormous floral heart containing the words, "My Pal," was provided by Capone. Lombardo was buried in Mount Carmel Cemetery on Sept. 11.

After Lombardo, there followed a succession of short-lived presidents of the Chicago Unione, and the Unione itself began to diminish in importance as the Chicago Sicilian-Italian criminal societies consolidated. 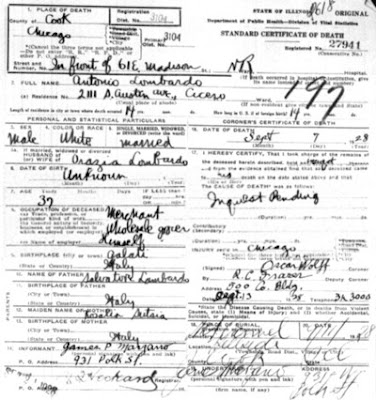